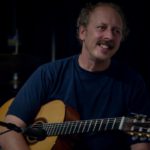 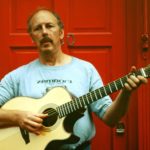 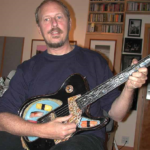 Richard Royall “Duck” Baker IV (born July 30, 1949) is an American acoustic fingerstyle guitarist who plays in a variety of styles: jazz, blues, gospel, ragtime, folk, and Irish and Scottish music. He has written many instruction books for guitar.

His reputation rests on his work as a solo fingerstyle guitarist in multiple genres: Irish and Scottish music, American folk music, ragtime, gospel, and blues. He was born Richard Royall Baker, IV on July 30, 1949 in Washington, D.C., though he grew up in Virginia. As a teenager he played in rock bands before becoming interested in acoustic blues and jazz. He listened to the Jazz Crusaders, Jimmy Smith, and Miles Davis, but Misterioso by Thelonious Monk got his attention most at the age of 16. He learned about ragtime from Buck Evans, his teacher and stride pianist.

In the early 1970s, he moved to San Francisco and performed a wide range of material, which can be heard on his debut album, There’s Something for Everyone in America, on Kicking Mule Records. In addition to developing his solo style, he immersed himself in the local swing jazz and avant-garde jazz scene. He was in a swing guitar duet with Thom Keats and a bluegrass band. From the late 1970s to the middle 1980s, he lived in Europe, spending time among free jazz musicians in London. During these years, he played with Eugene Chadbourne, John Zorn,[3] Henry Kaiser, Woody Mann, and Jim Nichols. He toured throughout the world and released an album of Scottish and Irish music before coming back to America in 1987.

His solo recordings since 1980 have largely focused on his own compositions. Since moving back to England in 2004, Baker has formed several groups, with musicians such as Joe Williamson, John Edwards, Mike Piggott, and Giorgio Buttazzo.

Baker also frequently writes reviews for a variety of jazz publications, and is the author of several instructional manuals for guitarists. He has been a columnist for the UK guitar magazine Acoustic and has had articles published in two books, including John Zorn’s Arcana series.

Type and press Enter to search